Heart failure rarely occurs on its own. Various conditions can make the heart work harder than it should, exacerbating your heart failure symptoms. Heart failure can also lead to additional complications, such as kidney or liver disease or heart valve difficulties.

As part of confirming your diagnosis, your doctor will likely order blood tests and other testing to examine what’s wrong with your heart and to rule out any other diseases.

Coronary artery disease is the most common cause of heart failure in Canada.

It occurs when cholesterol deposits in the walls of the coronary arteries, causing them to become narrowed or blocked. This deposit of cholesterol plaques is called atherosclerosis.

Over time, coronary arteries may become too narrow and impede blood flow to the heart muscle. This may result in chest pain (called angina), cause a heart attack, and weakened heart muscle.

A heart attack, or ‘myocardial infarction occurs when the cholesterol plaques spontaneously rupture, causing a blood clot to form within the artery. This results in a sudden lack of blood flow and oxygen to the heart muscle. It is not entirely clear what causes certain cholesterol plaques to rupture. 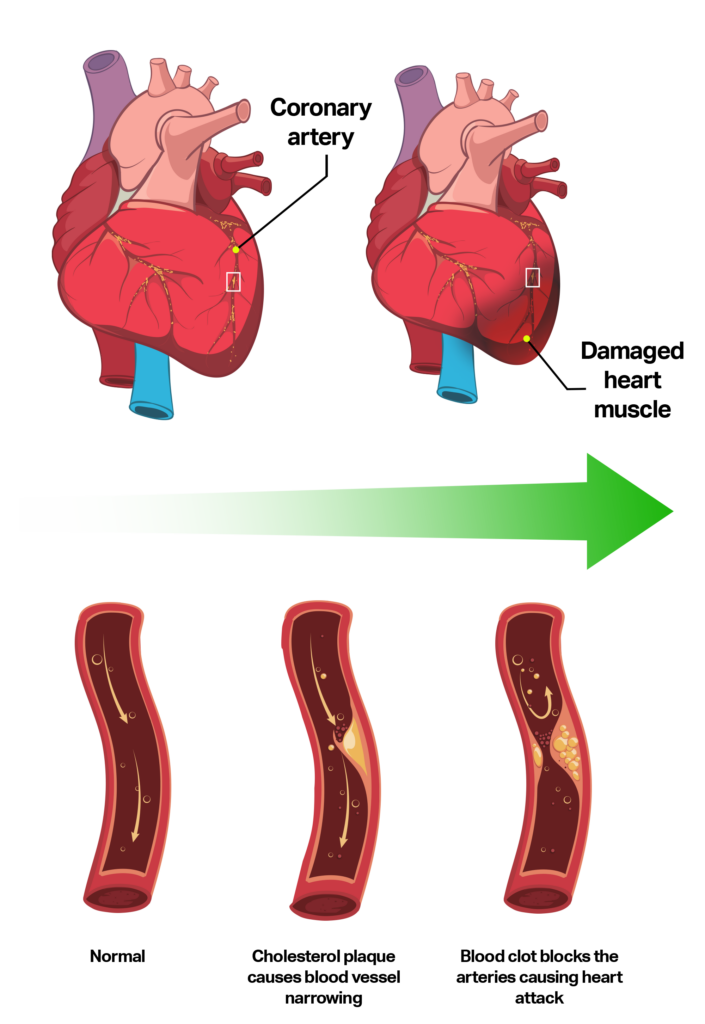 Coronary disease is typically diagnosed through different types of stress tests. The stress may either be exercise on a treadmill or bicycle, or a ‘pharmacologic stress’ brought on by medication.

Risk factors for cholesterol plaques include:

Atrial fibrillation is a problem with the electrical system of the heart.

In atrial fibrillation, there is disorganized, chaotic electric activity in the atria instead of a single electrical signal being sent from the SA node to the AV node with each heartbeat. This causes the atria to beat irregularly and quickly, or to “fibrillate.” This sends several signals to the AV node, which in turn can cause the ventricles to beat quickly and irregularly. 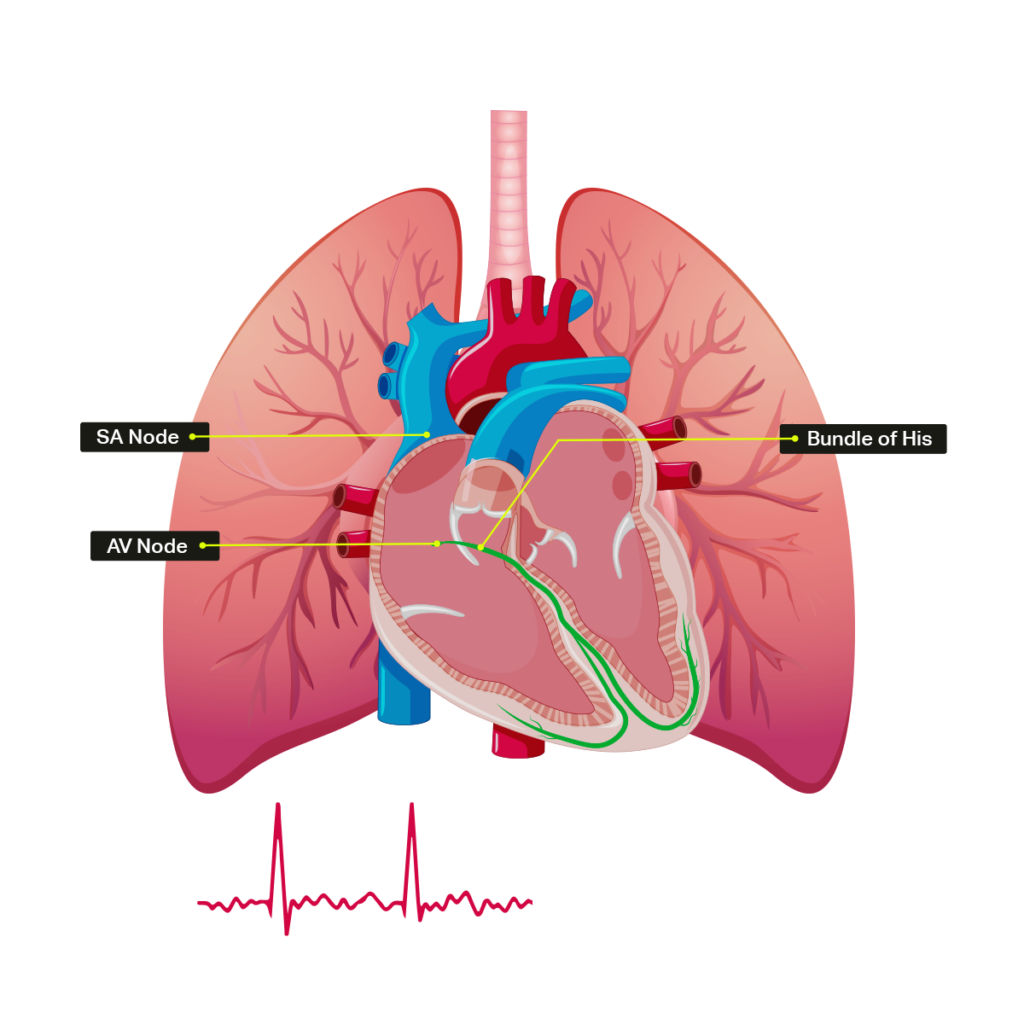 See How the Heart Works for more information on the electrical activity in the heart.

How Common Is Atrial Fibrillation?

Atrial fibrillation is the most common cardiac arrhythmia, affecting about 350,000 Canadians.

Most common risk factors are older age and high blood pressure for many years. Being overweight, sleep apnea and abnormalities of the thyroid function are also risk factors, as well as genetic factors which are still being studied.

What Is the Risk with Atrial Fibrillation?

How Is Atrial Fibrillation Diagnosed?

Atrial fibrillation is typically diagnosed with an ECG. It may also be detected with a heart monitor that is worn for an extended period of time. These tests may be ordered after an individual has a stroke to determine if atrial fibrillation has caused the stroke.

After atrial fibrillation is diagnosed, other tests are usually considered. An ECHO is usually ordered to make sure that there is no underlying structural problem with the heart (like a weak heart muscle or valve problem). A blood test to check the thyroid function is also usually ordered.

Other tests, like a sleep study, may be considered to see if sleep apnea is contributing to atrial fibrillation.

Are There Different Types of Atrial Fibrillation?

How Is Atrial Fibrillation Treated?

Atrial fibrillation can be treated with medications and procedures to reduce its symptoms, control the heart rate, and prevent a stroke.

What Blood Thinners are Available?

Aspirin is a mild blood thinner that lowers the risk of stroke in atrial fibrillation by about 20%.

There are more powerful blood thinners that reduce the risk of stroke even further, up to 60-70%.

Warfarin, or Coumadin, is an older medication that is effective at preventing strokes. However, it is not an easy medication to take, as there is not a single correct dose for everyone, and an individual’s dose will usually change over time. Regular blood tests (called an INR) are required to make sure the blood is thin enough, but not too thin. Warfarin also has many interactions with other medications and some foods.

Newer medications called direct oral anticoagulants have been shown to be as effective as warfarin in reducing the risk of stroke and do not require regular blood tests to monitor. Four are currently available in Canada:

These medications are all cleared by the kidneys, so they can’t be used in people with very reduced kidney function. They are also not safe in patients with mechanical heart valves.

What Are the Downsides of Being on A Blood Thinner?

The main concern is major internal bleeding – usually in the gastrointestinal tract (stomach or colon). It will be obvious if you see red blood in your bowel movement that you are bleeding internally. However, if the bleeding is coming from the stomach, it may come out in the bowel movement as a dark black tar. If you notice anything like this, you should immediately seek medical attention.

The other main site of internal bleeding is inside the brain. This is very rare but can be devastating. It may occur after trauma (like a fall) or sometimes spontaneously. Slurred speech or drowsiness may be a sign of this complication and requires immediate medical attention.

There are reversal agents (antidotes) being developed for all the blood thinners mentioned above.

Your healthcare provider will talk to you about which blood thinner option is best for you.

Arrhythmogenic right ventricular cardiomyopathy (ARVC) is a condition where part of the heart that is usually made up of muscle fibres is replaced by fat or scar tissue. It is an inherited condition that it can run in families.

It usually affects the right ventricle but may also affect the left ventricle as well. 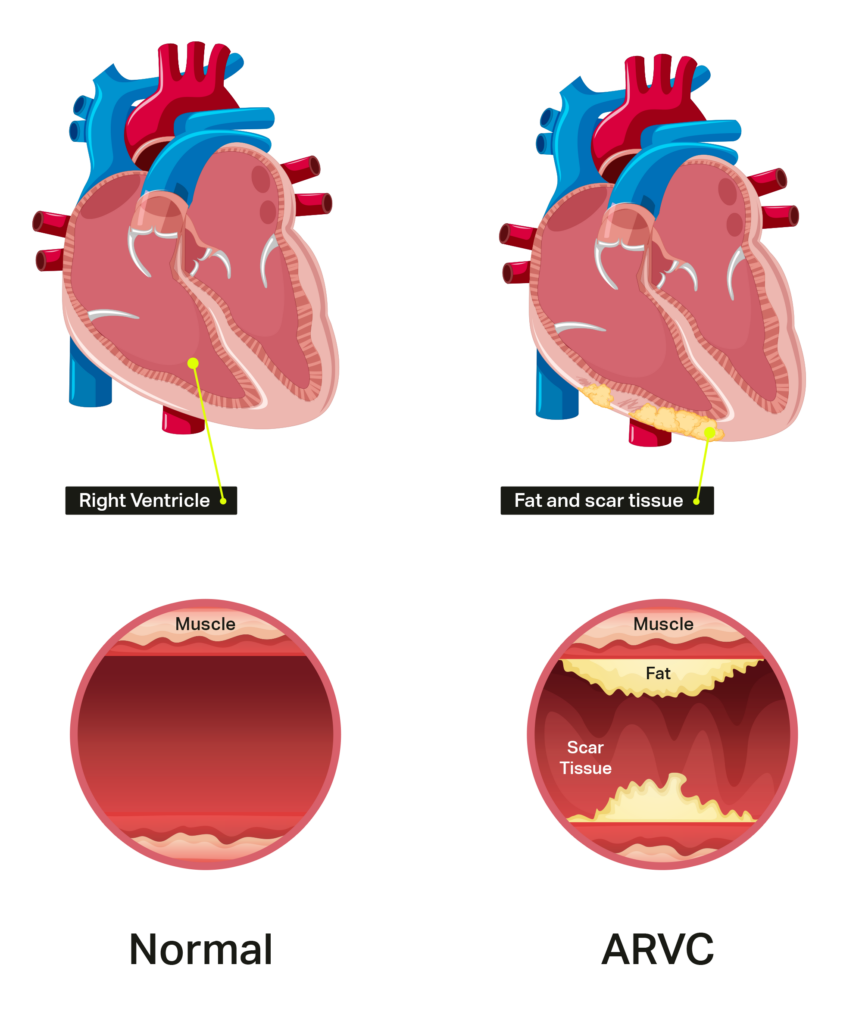 What Are the Symptoms Of ARVC?

People affected by ARVC may develop symptoms of heart failure because the ventricle becomes weak. This results in fatigue, shortness of breath, and swelling in the legs and abdomen.

Having ARVC also predisposes an individual to arrhythmias. These ventricular arrhythmias may cause someone to experience palpitations, feel dizzy, pass out, or even to die suddenly.

How Is ARVC Diagnosed?

ARVC is diagnosed based on family history and investigations, like an ECG and ECHO. A cardiac MRI is also a good test to look at the right ventricle and see if muscle has been replaced by fat or scar tissue.

Because ARVC is usually an inherited condition, genetic testing via a blood test can sometimes be used to screen family members of affected individuals.

How Is ARVC Treated?

Unfortunately, ARVC cannot be cured. Treatment aims to control the symptoms of heart failure and treat potentially life-threatening arrhythmias with medications or ICD.

If the symptoms of ARVC cannot be controlled with medications and device therapies, patients may be considered for a heart transplant.

People diagnosed with ARVC should not participate in competitive sports.

Hypertrophic cardiomyopathy (HCM) is a condition where the heart muscle becomes abnormally thickened because of a genetic mutation. It can run in families.

Heart muscles can become thickened for other reasons, such as having high blood pressure for many years, but this is not considered HCM. 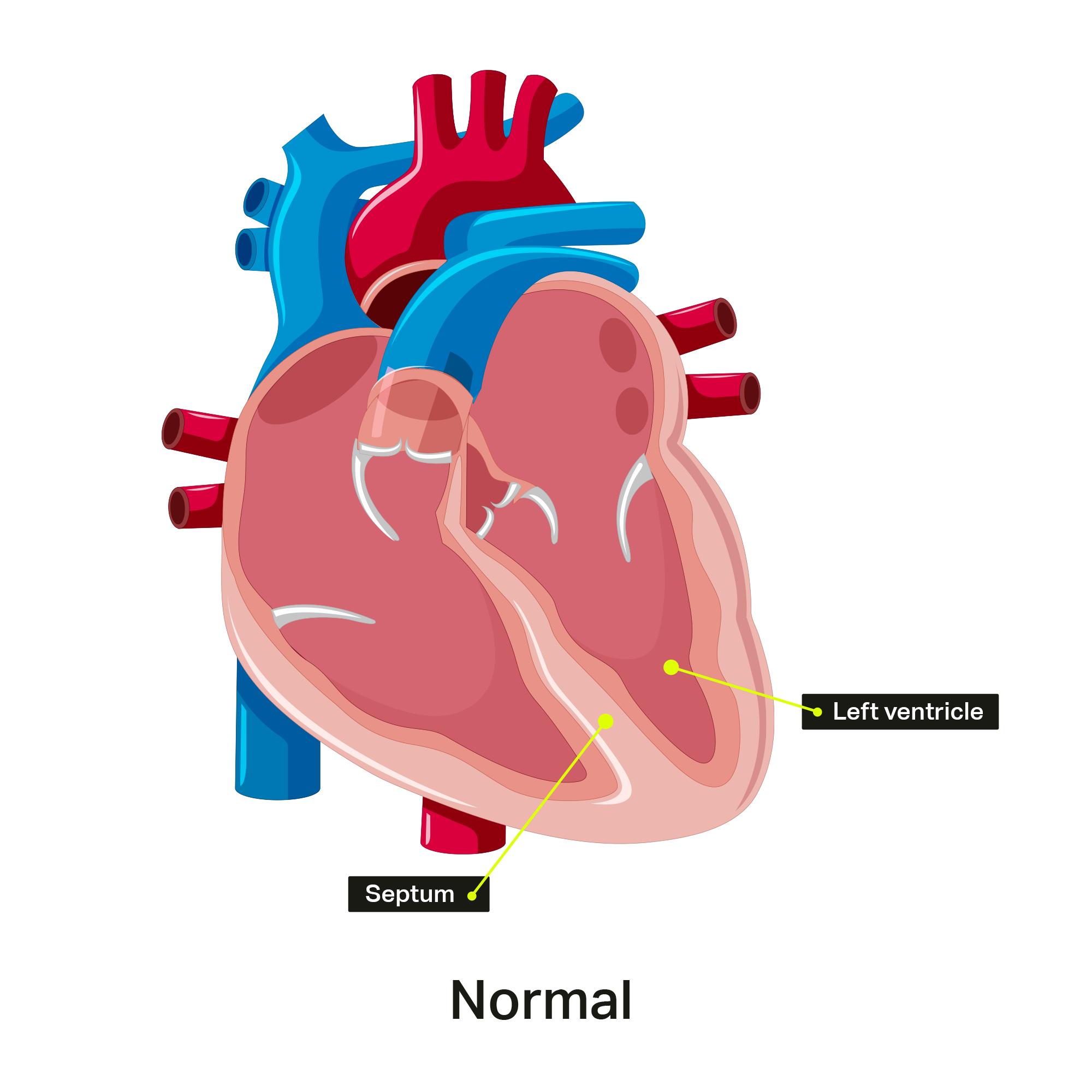 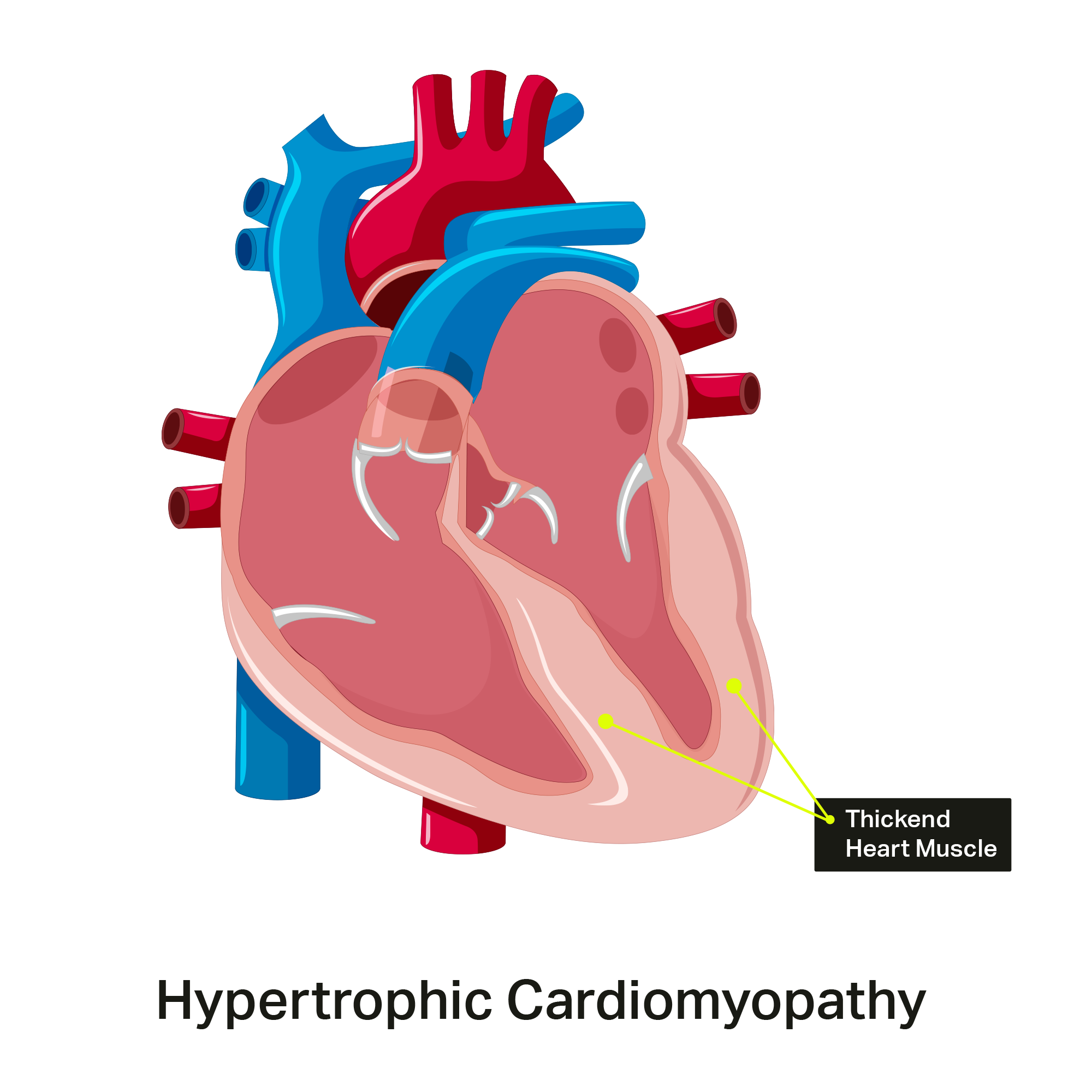 What are the Symptoms of HCM?

The heart doesn’t relax well if the heart muscle is thickened, so people with HCM can develop problems related to obstruction of blood flow through the heart, arrhythmias, or even heart failure. They may also experience dizziness, chest pain, shortness of breath, palpitations (racing heart) or fainting. When the thickened heart muscle blocks blood flow out of the heart, it is called hypertrophic obstructive cardiomyopathy (HOCM). However, many patients with HCM never develop any symptoms or complications.

HCM is also the most common reason for sudden death in a young person. After being diagnosed, people with HCM should not participate in competitive sports.

If a family member is diagnosed with HCM, other individuals in the family should be screened. Tests to screen for HCM include an ECHO or a blood test to look for a genetic mutation.

How is HCM Treated?

Depending on the severity of the disease, therapies may include medications, invasive procedures (like septal alcohol ablation or surgical myectomy), and devices (like an ICD). Sometimes the disease is severe enough that people may be considered for a heart transplant.

Sarcoidosis is an inflammatory condition that can affect many different organs. It is characterized by collections of inflammatory cells, called granulomas. It is not entirely clear what causes these granulomas to form, but they may be related to the body’s own immune system response to an infection. There is also likely some genetic component, which is why sarcoidosis sometimes runs in families.

Sarcoidosis affects the heart in two main ways as the granulomas can deposit in the heart muscle:

How is Sarcoidosis Diagnosed?

The two main tests to diagnose cardiac sarcoidosis are a PET scan and a cardiac MRI. Other tests like an ECG, ECHO, holter monitor, coronary angiogram, or heart biopsy.

How is Sarcoidosis Treated?

Because sarcoidosis is thought to involve the body’s immune system, the treatment is immunosuppressive medications. Corticosteroids (like prednisone) are usually taken, followed by other medications. Other device therapies, like a pacemaker or ICD, may be considered.

Sleep apnea is a condition where people stop breathing during sleep. There are two main forms of sleep apnea:

Sometimes people have a combination of both types of sleep apnea.

Common symptoms of sleep apnea are:

Sleep apnea is very common in people with heart failure. If untreated, it can lead to worsening of the symptoms of heart failure.

How is Sleep Apnea Diagnosed?

Sleep apnea is diagnosed with a test called a sleep study. You will sleep over in a hospital or clinic and be monitored closely during sleep to determine how deeply you are sleeping, if you stop breathing, and how often you stop breathing.

Depending on the type and severity of sleep apnea, different treatments are available such as weight loss or lifestyle changes for mild sleep apnea or a continuous positive airway pressure (CPAP) machine for more severe cases. Your health care provider will talk to you about which is right for you.

Cardiac amyloidosis is a condition where there is a deposit of abnormal proteins, or amyloid, in the heart tissue. Over time, this causes the heart to become thicker, stiffer, and less effective at pumping blood out to the rest of the body, leading to heart failure.

Cardiac amyloidosis can also affect the electrical pathways in the heart, which can cause abnormal heart rhythms.

Symptoms of cardiac amyloidosis include:

A number of tests may be performed to diagnosis cardiac amyloidosis such as ECG, ECHO, cardiac CT scan, coronary angiogram, MRI, PET scan or cardiac biopsy.

In most cases, cardiac amyloidosis is caused by one of two abnormal proteins: light-chain or transthyretin.

Plasma cells are located in the bone marrow and produce antibodies for the immune system. Antibodies are made up of heavy and light chains. When the plasma cell becomes malignant it produces too many light chains for that antibody.

This can cause a few different scenarios:

AL amyloidosis is the most commonly diagnosed form of systemic amyloidosis, generally affecting people between the ages of 40-85 years.

Transthyretin is a protein produced by the liver. Some transthyretins can fold abnormally and become amyloid deposits. There are two types of transthyretin (ATTR) amyloidosis: wild-type ATTR and mutant ATTR.

Wild-type can create amyloid deposits over several years and is more common in people over the age of 70 years. Amyloid deposits form primarily in the heart, veins and arteries, and soft tissues.

In mutant type ATTR, people are born with an abnormal transthyretin gene leading to more rapid amyloid deposition. The heart and nerves are the most common sites for amyloid deposits in mutant ATTR.

Go To What is Cardiotoxicity?

I May Look the Same, But…

Hello. My name is Paula. I live…

Juggling My Roles as a Caregiver